In February 2017, in the Santa Cruz mountains, on my father's property, during an intense rainstorm, four catch basins were being overwhelmed with mud debris, causing a small mudslide above the house. It was evident, with the intense rain, that the Franciscan soil would soon liquify, Several latent springs above the mudslide had been activated at unprecedented levels, severely compounding the problem

As I was directing the water to flow toward the nearest catch basin, a much larger mudslide occurred. Suddenly and fast, hundreds of meters of liquefied soil was rushing down the hillside, mature groups of Bay trees sliding in its wake. The water output was measured at over two thousand gallons per minute.

This became a field engineering challenge. As the situation evolved, and the scope of the work expanded, we brought in necessary extra labor. Torrential rain poured down the hillside. We had to secure huge tarps, and secure them underneath this river of water. The mudslide and hillside had a slope ratio of two to one. At times, laborers needed to be roped off to work on the cliff face. 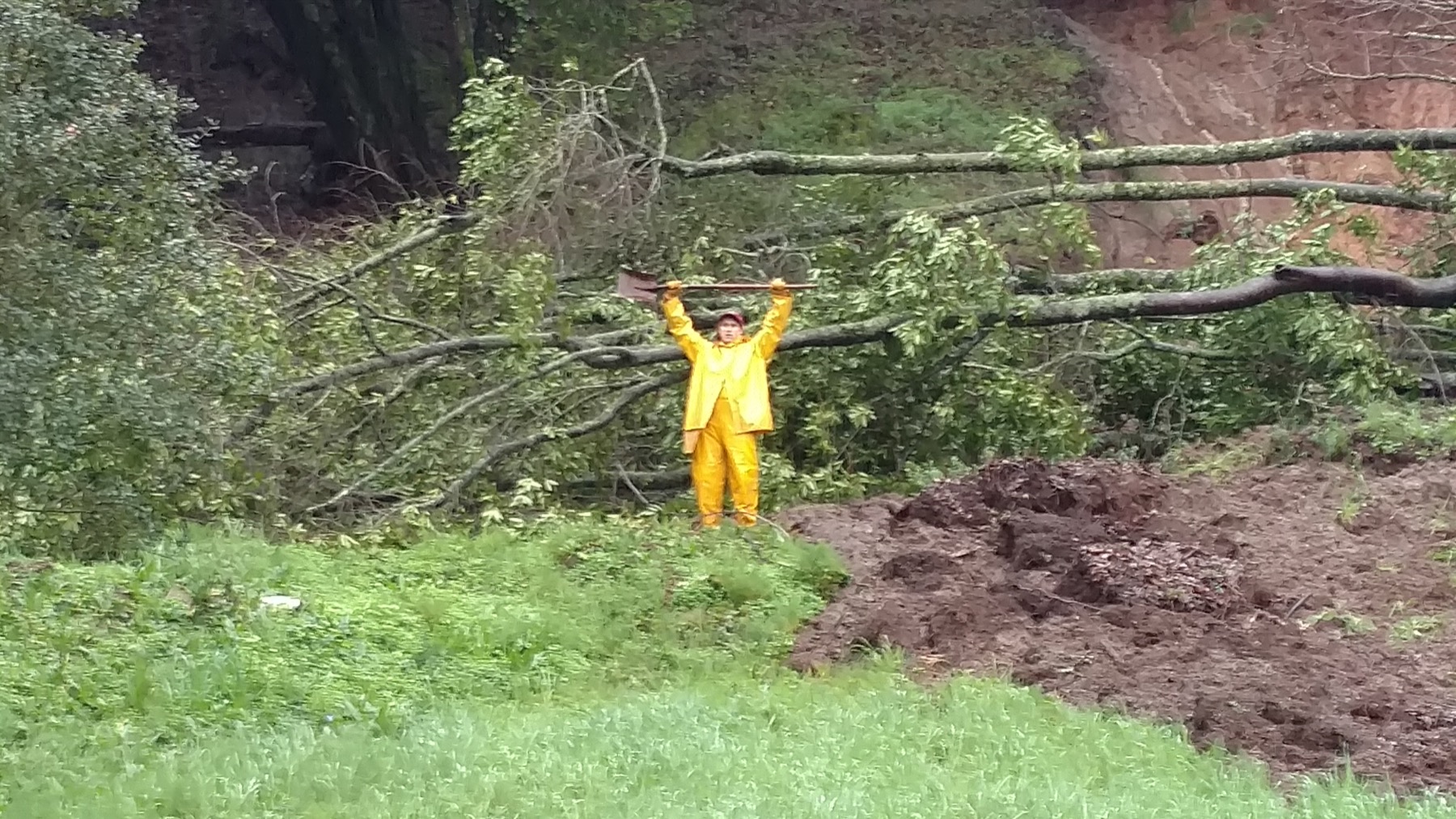 Quick, decisive decision-making was essential to channel this fast moving water into catch basins. Through my leadership, we laid several hundred meters of tarp, so the water could rush over the plastic, thus preventing further liquefication. We used sandbags, stakes, and duct tape to hold the tarps in place. There was another cluster of Bay trees at the top, directly overlooking the newly formed mudslide, but still stable. I taped the tarp around the tree's base, tied sandbags on ropes of varying length to hang over the mudslide, keeping the tarps uniformly in place, in addition to stakes.

A dramatic increase of water pouring from the streams above, caused new mudslides. The soil liquified above the mudslide we had just stabilized. The combined new mudslides washed away another portion of the hillside, including the mature Bay trees with the ropes of sandbags attached. 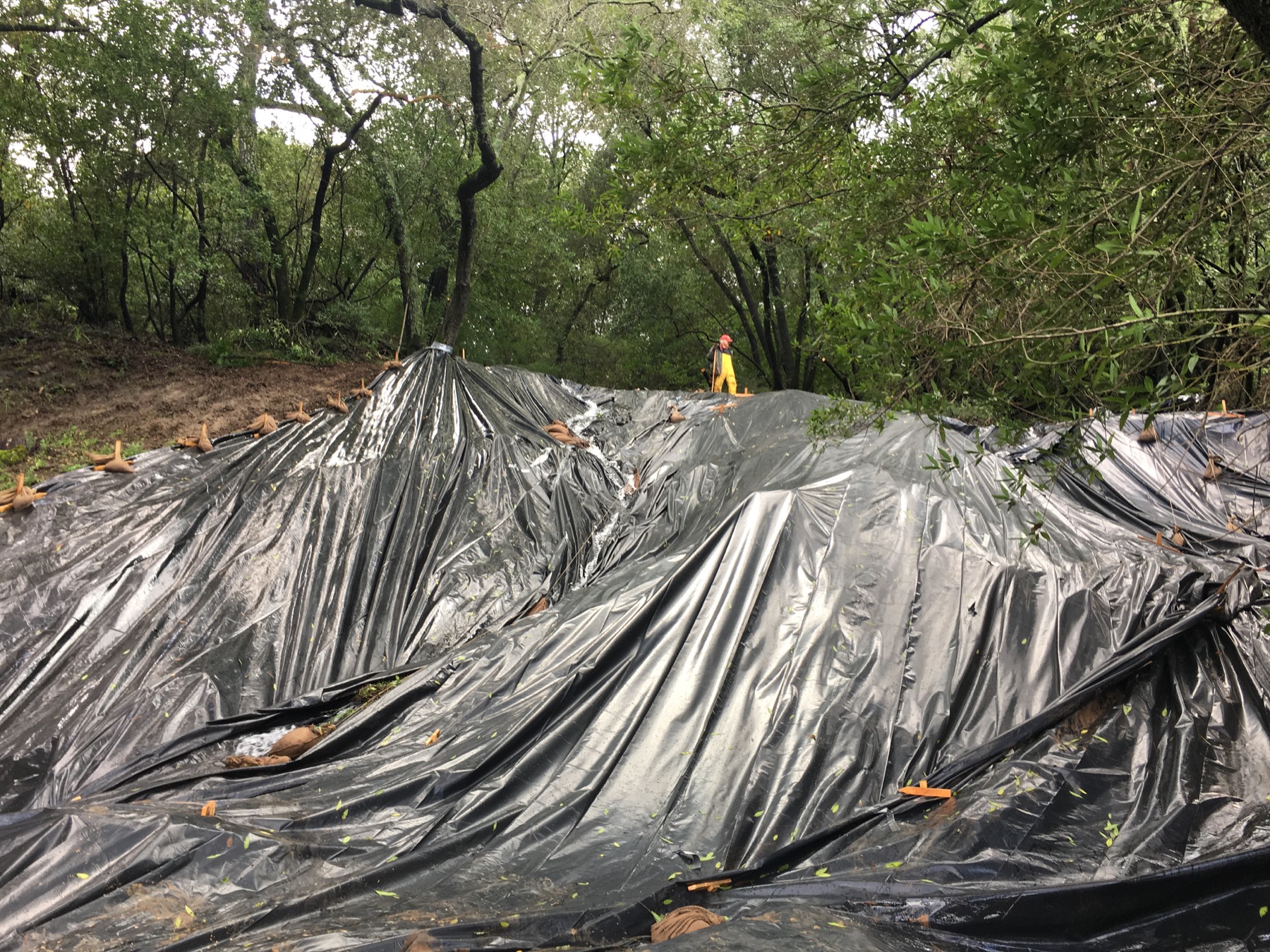 The scope of work had increased, as had the urgency. Again, we had to place the tarp in challenging topography. Laborers attached by ropes, hung from the cliff face to carry hundreds of sandbags up the muddy mountain to be placed on top of the tarps with stakes. Taping the tarps together in ravaging water was even more challenging this time. The hillside was not stable, and new sliver slides kept forming, higher up the mountain, threatening the work below.

It was imperative to capture the runoff at the springs' origin. With a team of nine people under my direction, we tarped an area of over an acre. At the bottom of these slides, I used fallen trees to create a damlike structure underneath the tarp to direct the water to the culvert.

This project required hundreds of hours. I experienced first hand the power of mother nature, the imperative of instantly creating a practical design system that could be immediately implemented and easily communicated to the labor team, and one that had to be flexible to respond to ever changing, and more challenging, circumstances. 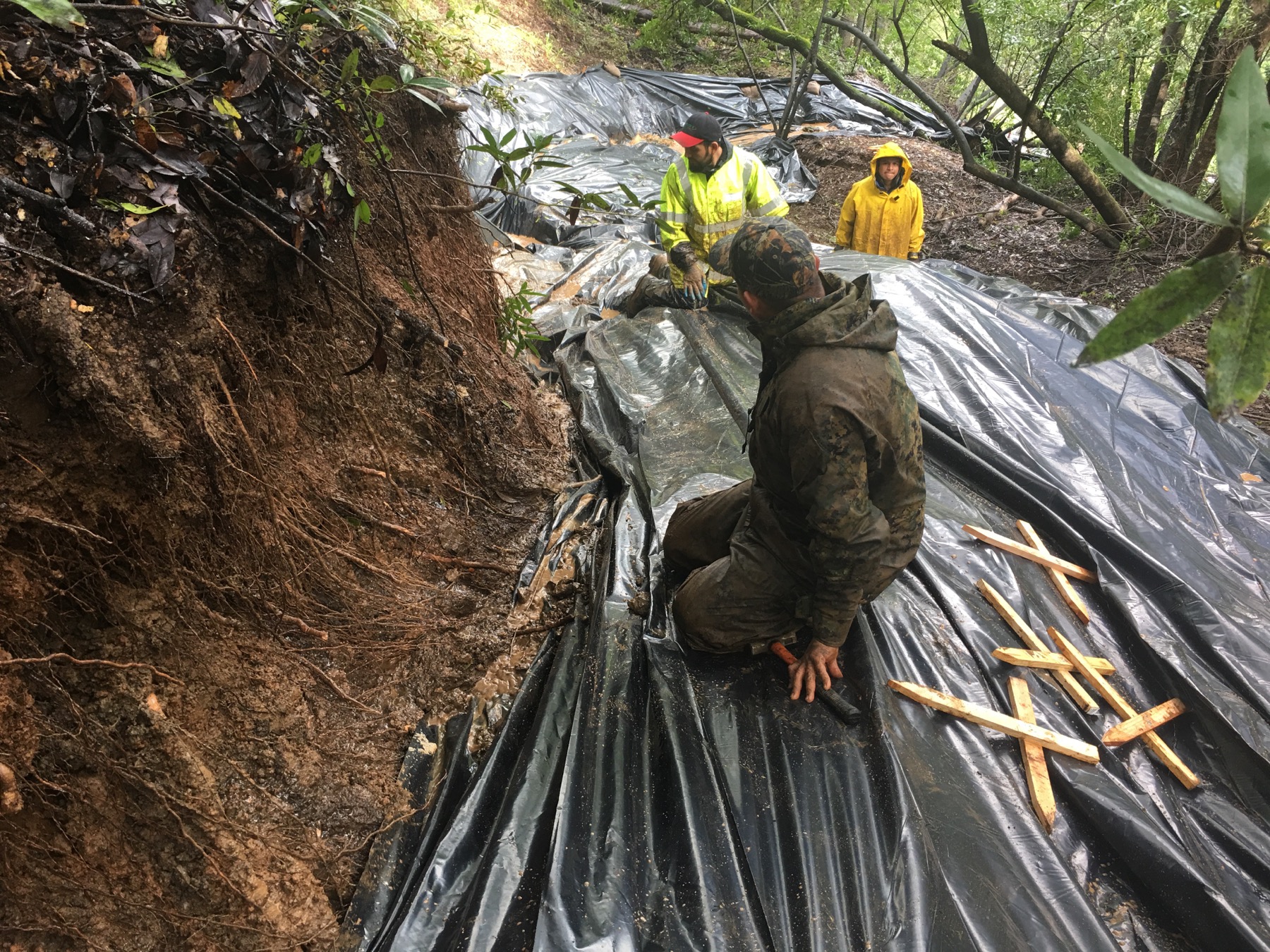